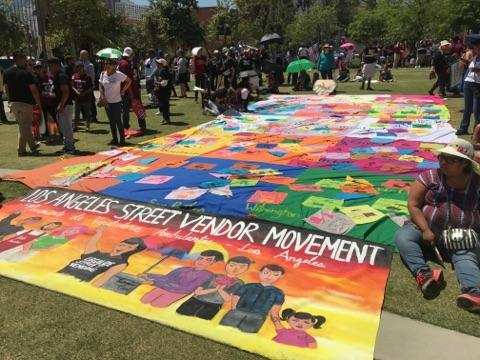 The press conference will take place on the corner of Hollywood Blvd. & Highland, in front of Forever 21.

Hollywood street vendors will hold a press conference to protest the designation of Hollywood Blvd as a “no vending” area within LA City’s Proposed Sidewalk Vending Program. Street vendors will then collect petitions of support from visitors and tourist on the Walk of Fame.

On Tuesday, April 17th, 2018, the Los Angeles City Council voted 11-4 to approve a framework to legalize street vending in Los Angeles. The City Attorney is now drafting the ordinance which is set to return to City Council next month in July. The Los Angeles Street Vendor Campaign (LASVC) believes this is the right step toward creating economic opportunities for hard working sidewalk vendors. However, we are concerned about the exclusion of Hollywood Boulevard. The “Operating Requirements” (Attachment 3, Page 6) of the program, recommended by the office of the Chief Legislative Analyst (CLA) and adopted by City Council, include a provision that completely prohibits sidewalk vending within 500 feet of Hollywood Boulevard.

Hollywood business groups have claimed that sidewalk vending obstructs pedestrian access to the walk of fame and Councilmember O’Farrell asked for Hollywood Boulevard to be included in a list of no-vending areas. Sidewalk vending has been an integral part of street culture in Los Angeles for many years and tourists visit Los Angeles, including the walk of fame, with an expectation to see and shop from sidewalk vendors. Dozens of vendors have been organizing to support sidewalk cleanliness and pedestrian safety and the LASVC believes sidewalk vendors in Hollywood should be part of the conversation in finding solutions to issues of sidewalk obstruction and overcrowding. Hollywood vendors and allies will be speaking on Wednesday to uplift their stories and call on the small businesses and Councilmember O’Farrell to work together to find a solution that doesn’t exclude an entire group of hardworking entrepreneurs.

Join Street Vendor Leaders in the fight to an equitable future. The press conference will take place on the corner of Hollywood Blvd. & Highland, in front of Forever 21.

What lessons can we learn as #NonProfits from economic justice gains in Los Angeles? @npquarterly's next #RebuildtheEconomy webinar will highlight ways you can organize to improve your own community — featuring our own @isela_gracian. bit.ly/2QuLIcn

Friendly reminder on #HumanRightsDay that the housing and homelessness crisis is a humanitarian crisis, and housing is a human right! calmatters.org/california-div…

Tonight! Join us to learn about our community land trust and the benefits of communally owned land to develop equitable housing for the communities of Boyle Heights and East LA. Free food - music - games pic.twitter.com/NmFZj5rhNR

About 2 months ago from East LA Community Corporation's Twitter via Hootsuite Inc.

About 2 months ago from East LA Community Corporation's Twitter via Hootsuite Inc.